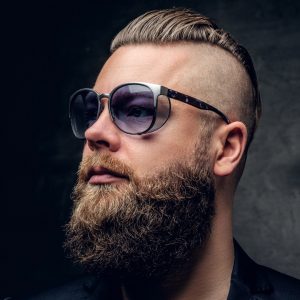 Have you ever wondered about the history of beards and if there are any unique facts about the trending or classic beard resting on your face? That is exactly what we are going to be talking about today!
Hello, everyone! Thank you for joining me in my writer’s chair as I once again take a break from the barber chair. I love wearing both hats in my business. I get to show off my artistry, continue to practice in my chair, and I get share with you what I have continued to learn over time. While we are now deep in the school year and are headed very rapidly towards the holidays, don’t forget to book your appointments with me now. This way you can look and feel your best no matter what the rest of this year is going to bring! Also know that I have been continuing to follow all the recommended safety guidelines in my shop, and I expect the same from everyone else who works in the studio and of my customers. Having suite-style rooms allow for more safety and protection from anything lurking and trying to get you sick. My suite studio might be one of the safest places in Charleston!
Today, we are going to be talking about one of the most beloved things by men and women alike – and that is beards! In this new series, we are going to talk about some interesting facts about beards that you may or may not know, and in the second half, we are going to be talking more about the history of the beard itself. I look forward to seeing you soon in my barber chair, but until then I hope you sit back and continue to learn! Here are 8 of some of the most interesting and very unique facts about the beard!
I hope you enjoyed these interesting and unique facts. Don’t worry, there are more fun facts just like these that will be featured in our next blog along with sharing and talking about the history behind the beard itself. I am Patrick the Groomsmith and I am here with the best barbershop in Summerville, the best nonsurgical hair restoration in Summerville, and more.